We were delighted to hear earlier this week that archivist Andrew Dalton has discovered a previously unheard recording featuring Anne singing with Vera Lynn 60 years ago (The Telegraph article is here with a clip of the song).

In the article it's believed this was the only track that the two great stars recorded together, but here at the Official Anne Shelton website we know different! Of course our 'driving force' (and Anne's niece) Kelly, is custodian of all of Anne's estate and that includes a number of rare and interesting recordings, one of which, 'Let's Harmonize' also features a duet with Anne and Vera. Kelly is currently working with record companies and producers on a new CD album which we are hoping will include this very rare recording. Keep looking in, here at the website for more details to follow..............

In Memory of Jim Woolley

It is with much sadness that I write to say Jim Woolley, a dear friend and my guru, passed away in the  morning of 12.01.10. which also happened to be his birthday.

Jim was a most lovely man, and a gentleman in every sense of the word. He was kind, caring, and a very ‘gentle’ man indeed. He was also, as we often said, my Aunt Anne Shelton’s number one fan, a title he was most proud of.

It is no secret that without the immense input that Jim gave me regarding the early part of Anne’s career I would not have been able to write her biography ‘With a Smile and a Song’ He was truly the most knowledgeable person regarding Anne, and many other artistes from the 40s/50s music era.  What he did not know about my aunt’s career was not worth knowing.

He met Anne many times, and became a good friend of hers, and the family.

Over the past years he has been a great ambassador to keep her memory alive, and for that I will always be grateful.

I will truly miss Jim, and our little chats, and my heart goes out to Audrey his wife, and his family.

Later this year I will be compiling a new CD of Anne’s songs entitled ‘The War….and so Much More’ which will be dedicated to Jim. He was, as always very much involved in helping me choose the songs for this CD, and again as always his selection is, I feel, ‘spot on’

God Bless you Jim…..now you have the lady herself singing for you again!!!!!

At 19.00 on Friday 18th September on BBC Radio 2, Desmond Carrington took a look at Anne's career on his weekly programme. Unfortunately the BBC I-Player link has now expired, so if you missed it, you'll have to wait until its repeated sometime in the future!

This year (2010) Jeremy Prescott is opening the gardens at Anne's former home at 142 Court Lane Dulwich for the last time! Many of the stars from the recent tribute concert, including The Swingtime Sweethearts will be there. Keep watching this page to confirm the date, towards the end of the year

Just a quick mention here to all our friends over at Dulwich On View. Their website has run an article on Anne who as most of you know, was a resident in Dulwich for much of her life. The page and comments can be found here: dulwichonview.org.uk/Anne Shelton  and the whole website can be viewed here:

Kelly was featured on the BBC's Antiques Roadshow which was held at The Art Gallery in Dulwich last year. The show was televised on 15th February 2009 and included in the programme were Anne’s engagement ring, and a silver and crystal statue originally from Anne’s house.

A big thank you, to those of you, that supported the Anne Shelton O.B.E Blue Plaque Award. Anne received over 1200 votes and The unveiling ceremony took place on the 6th October 2008.

The plaque was unveiled by John Brunel Cohen O.B.E. D.L from The Not Forgotten Association and close family friend, Opera singer Teresa Cahill. Among the guests was the Lady Mayor of Southwark. There were also standard bearers from The British Legion, and the Swingtime Sweethearts sang several songs of Anne’s in her memory. 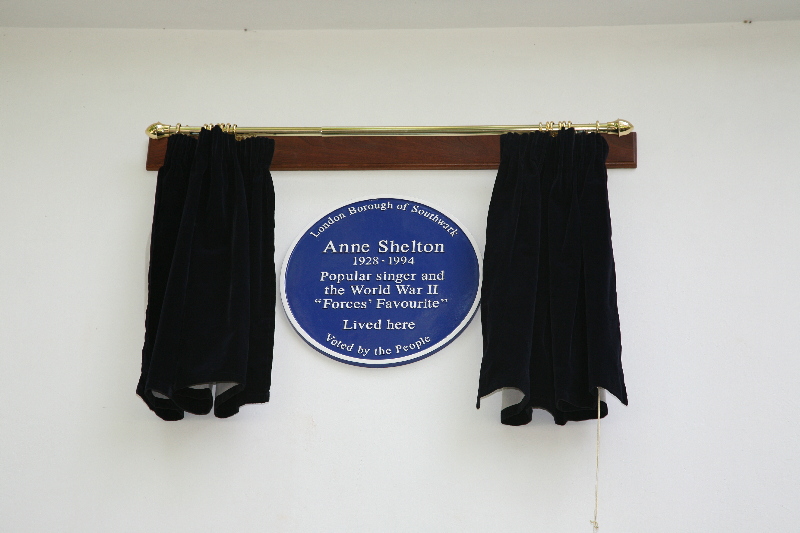 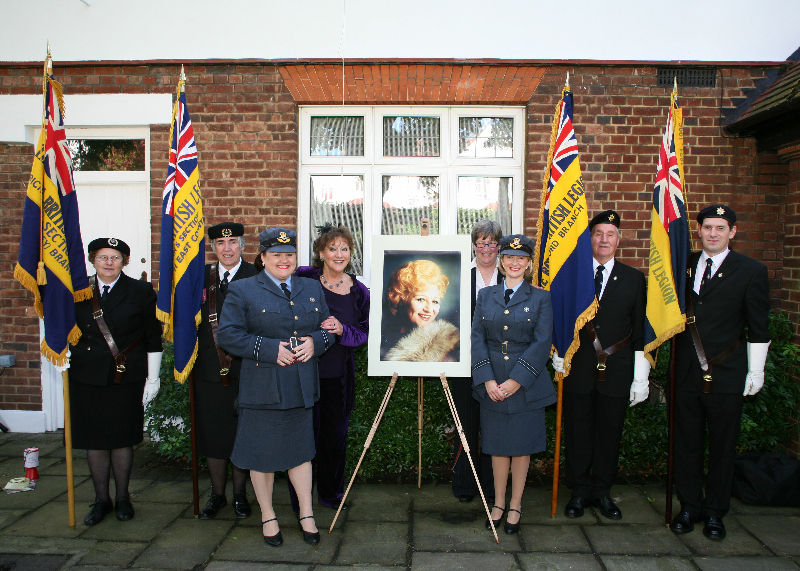 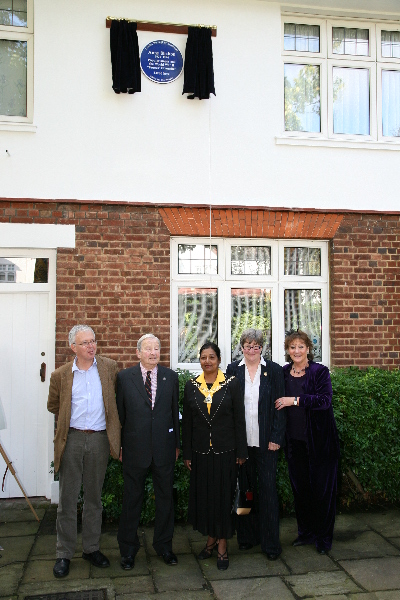 Should you wish to see the plaque it is now in place at 142 Court Lane, Dulwich, London SE21 7EE, where she lived for over 50 years

Also a special mention and thanks must go to Rod Keeble who has given us some tremendous support and encouragement via his website, please take a moment to check it out at:

The opening of the Garden at Anne Shelton’s former home, 142 Court Lane, Dulwich, on Sunday 8th June went really well with over 300 visitors who helped to raise a substantial amount of money for National Garden Scheme charities and St Christopher’s Hospice.

Kelly and the visitors were entertained through the day with many of Anne's hits, by 1940's style duo

'The Swingtime Sweethearts' AKA Le'arna & Annie. The girls commented on the day:

"We had a wonderful time and have created a lasting memory to cherish forever. The day went so fast, I just wish we'd have had more time to chat to you about the family memories!!! Finishing off at around 5.40pm with "I'll Be Seeing You" that final time, I had to choke back some tears.... It really was a privilege to be standing in that special place, singing those words and thinking of Patty"

To see more of Le'arna & Annie, here is a link to their website: 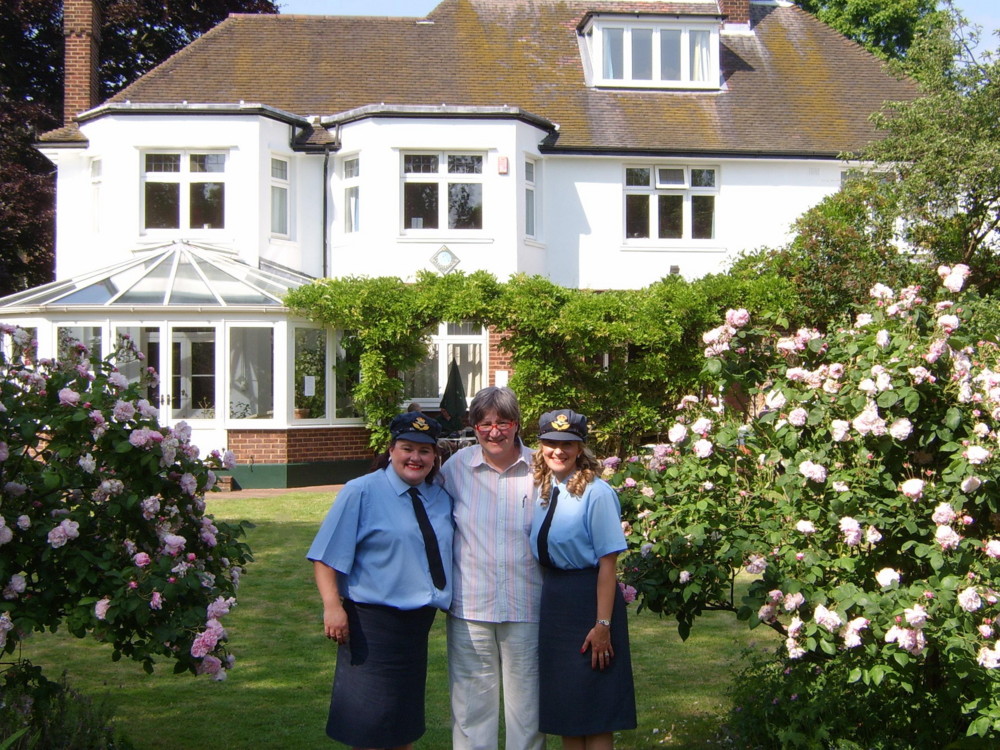 Kelly with The Swingtime Sweethearts in the garden at Glendower

Please e-mail for further details of these events

Return to the homepage