Two years ago, I compiled and released a CD entitled “Thank You Captain Miller” that featured my aunt Anne Shelton singing with Glenn Miller, and Bing Crosby, I also included a track called “If There are Stars in my Eyes” that was sung by my other aunt, Anne’s youngest sister Jo Shelton. It has been amazing the response I have had from those wonderful people that bought the CD, it has been so uplifting to hear such comments about my aunt, and is indeed a great reward to me to know how popular she still is even 12 years after her death.

Even more amazing, and pleasing have been the amount of people that have got back to me saying what a wonderful voice Jo had, and how similar it is to Anne’s. These comments, and the response, has spurred me on to compile another CD, that is unique, in as much as both Anne and Jo are featured on this CD, this has never been done before. By the magic of modern technology Anne and Jo’s voices have been merged, and they are both singing “Tread Softly”. On this track it is noticeable how similar there voices are, but some of you may be able to tell the difference. Another point of interest is that the words to the track entitled “Just Look Around” were in fact written by Jo, and the music was written by their close friend Tutti Camarata.

With “Thank you Captain Miller” I wanted to concentrate on releasing recordings that she made at the start of her career, with this new CD I am releasing songs from the 50’s when she was recognised as England’s leading lady of song.

The reason why I have decided to call this CD “My Pal Jo” is in memory of the close relationship that the two sisters had. Anne often said that ”Jo was her best pal, as well as her beloved sister". So a fitting tribute starts off this CD with Anne singing  “Happiness is a Thing Called Jo” I hope you enjoy  “My Pal Jo”, as much as I have enjoyed compiling it. 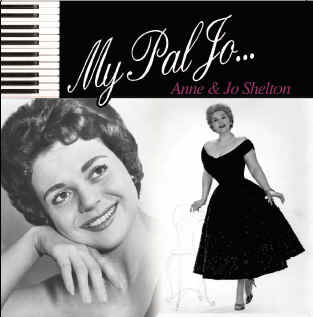 We are offering the CD by cheque / money order made payable to Kelly Richards for £10.99 + £2.60 postage and packing, please e-mail us at:

for details of where to send your payment or click the button below to pay by Paypal (price will include P&P).

We will deal with your order as soon as possible, please allow 14 days for delivery and e-mail us if you have any queries.